It's been out for a while but I've only just discovered Leopard WebKit, a modern build of the WebKit open source rendering engine for Leopard. Safari is built upon WebKit but Apple stopped updating Safari for OS X Leopard mid 2011 and with the web being what it is you'd be mad to browse using that now as many security vulnerabilities have been discovered meantime.

Well now with Leopard WebKit you can keep using Safari but with all the current security patches applied. What the devs have done is take the last PowerPC build of WebKit and selectively applied the patches written since to bring the browser up-to-date security (and feature) wise. It doesn't actually replace Safari, rather when you launch it it starts Safari but uses Leopard WebKit as the rendering engine.

I've been using it all day today at work (several windows open with several tabs in each) and it actually feels slightly quicker than TenFourFox, which is strange as on paper (and in benchmark testing) TenFourFox is significantly quicker at crunching Javascript. Anyway, download the latest stable build (as of this writing), install ClickToFlash (also available in the Safari Extensions Gallery) and try it for yourself - if you don't like it you can always switch back to TenFourFox and it's nice to actually have choice on the shrinking PowerPC platform. 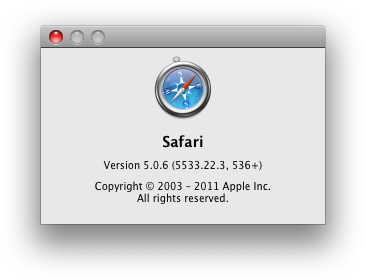