I went to the Gorillaz final ever concert last night. One word - AWESOME! 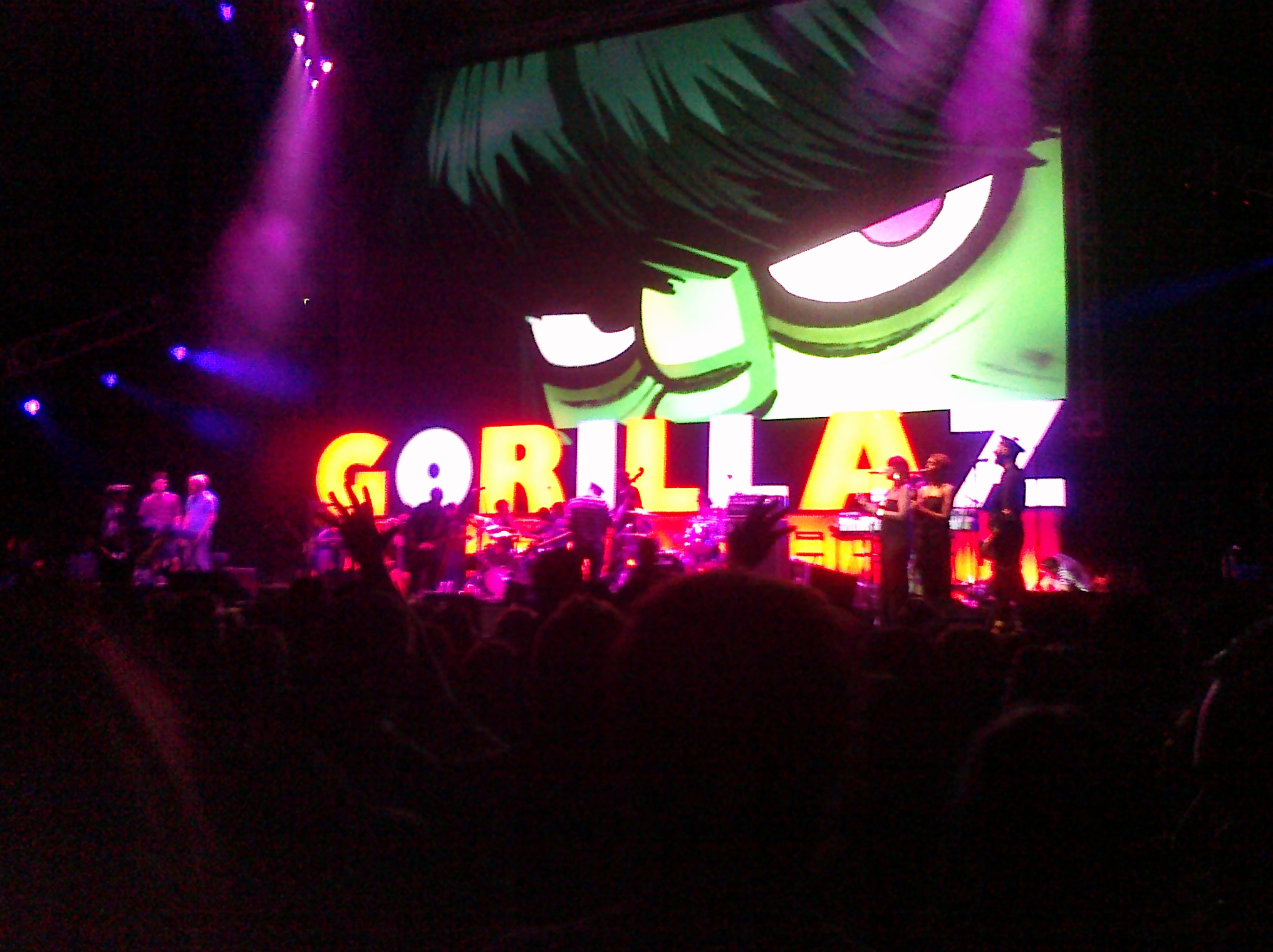 A blurry picture I know... but I challenge you to take a better one when being jostled in a crowd :-) All in all a great night!

I've been pleasantly surprised at how usable it actually is - I work a full 8 hour day using it and haven't actually used all that much data (mind you I haven't watched any youtube or anything like that, mostly remote consoles and email only) and some days there are two of us using the connection (my Palm Pre has a wireless hotspot app so up to 5 devices can use the same internet connection) and even then with some web browsing thrown in I've only used a few hundred meg.

The other thing it has given me is the freedom to work where I want to in the building, sit with people I normally wouldn't - if I'm at my desk I'd still be using that same connection over the phone so why not sit anywhere?

Just a quick update on the HTC Desire: After using it for a few days more now I've decided the keyboard is actually fine - I'm not sure if I've got used to it or the upgrade to Android 2.2 is the difference but for whatever reason I'm now pretty fast and accurate on it. The slight UI lag still annoys me though :-)

I have spent a good chunk of the day playing with a high end Android device, an HTC Desire. Overall I'm pretty impressed with it - the screen is beautiful and crisp (especially compared to my Palm Pre) and the device, while quite large, is very light.

There are a few issues I have with it though, and I suspect it is Android itself rather than the HTC hardware. Firstly when setting up things like wireless and carrier APN settings it seems like you have to dig through multiple levels of menus to get these things done - why can't I simply "click" on the wifi icon to get (say) a drop down menu to enter access point, passphrase etc? Secondly the keyboard - it's not too bad I guess but it was definitely not as smooth as the iPhone for example and I found I mistyped quite a bit (although I must say I've been spoilt by the hardware keyboard on my Pre so it could be something I get used to. Still, I was typing much quicker on an iPhone with a virtual keyboard...). Having said that the auto correct I found to be really good so my ham-fisted typing ended up looking ok, but I still found it annoying. Thirdly I found the UI lagged a bit - I know it's pushing a really high resolution but couldn't they have provided some sort of hardware acceleration? I mean c'mon, the phone costs near NZ$1,000 so to expect it to be a bit smoother is not too much to ask I think. As well as that I found the phone made some strange choices in the zoom level in the browser when double tapping, the battery life was terrible, multi-tasking was a bit clunky and I could see no obvious way to close a running app (something which I don't like about iOS as well it must be said - again I'm spoilt by my Pre and its seamless multi-tasking).

Having said all of the above it's not actually as bad as it sounds - and it was running Android 2.1 which is now almost a year old and has seen a few updates and performance improvements. There is much to like about this phone too - the hardware feels really solid and of a high quality (something which can't be said about my Pre unfortunately) and as mentioned at the start the screen is really nice and sharp. I think my biggest gripe is the lack of UI smoothness - if they can sort that then the whole experience would be a lot nicer!

I think Android is definitely getting better (the previous version I used was 1.6 and this is a big step up) and probably sometime next year will really start to shine - but for now I don't feel the urge to run out and spend a big chunk of my cash on a new Android device.