Not looking too flash

While checking out what Apple's stock price is doing now since the release of the New iPad (it's doing bloody well!) I thought I'd see how Nokia is doing now a year in to it's new relationship with Microsoft. The last time I checked the share price had dropped just below $10 per share (it was floating around $12 before the announcement) but just over a year later, and with the Lumia 800 and 710 having been on sale now for about 5 months things aren't looking great - the stock has since halved and is now hovering around $5.20.

Oh how the mighty have fallen - Elop has managed to carve off around 65% of Nokia's value in just over a year - I don't know how much longer Nokia can bleed like this :-(

My new favourite unicode - flipping the table on the way out:

Over at The Verge Chris Ziegler has done an amazing write up of the visual history of Android. Seems funny to think that Android has only been with us a few years - it certainly has come a long way from its humble beginnings. Having said that version 4 ("Ice Cream Sandwich") is the first version that I'd actually like to own - for whatever reason I've never really been a fan of Android (which is funny considering my like of most things Google and also the fact that it's built on the Linux kernel and user land), always finding it to be inconsistent and slightly laggy for most things. Android 4 changes that with a consistent subtle blue theme throughout and smooth hardware accelerated graphics for menus etc. Also doesn't hurt that Matias Duarte (who was head of design for webOS) is now the Director for Android User Experience and so had a large hand in the new look.

If only one of the manufacturers would make a vanilla handset whose screen wasn't bigger than 3.7 ~ 4.0" - I'm not too keen on going from my tiny Veer to a massive slab of a phone!

Last Thursday I went to the first concert that Portishead has done in New Zealand since the late 90's. I missed them when they came back then and didn't think I'd ever get to see them live as they pretty much dropped off the face of the planet and went quiet for many years so I'm stoked I got to catch them this time. They are definitely looking older these days but still played a really tight set - Beth's voice is as haunting and beautiful as ever.

In the tradition of blurry photos from concerts I give you Portishead: 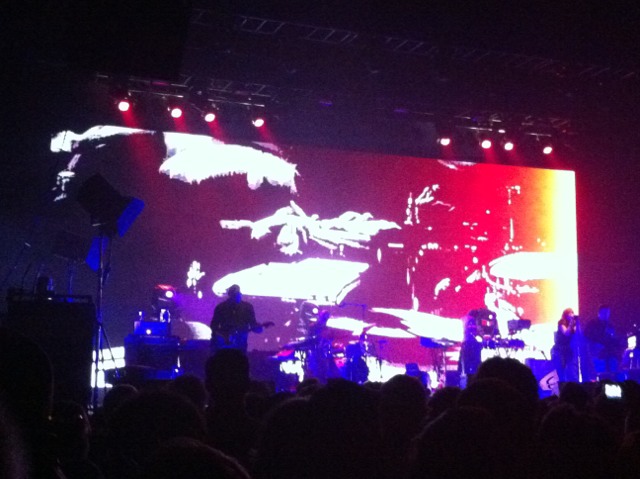 Two weekends ago Wellington played host to the 5th Kiwicon. This was was the second time that I've been to this event and I was well impressed by how it has grown - attendance has doubled in two years and the new venue (Wellington's Opera House) was both beautiful and roomy. The talks this year were a good mix of technical and more general with time being given to the new 3 strikes copyright law that has come into effect in NZ.

Highlights include Hacking Hollywood, a sensible approach to securing web browsers and the hilarious F is for Fail by Fosm and Fobski. As with last year over the two days much beer was drunk and bullshit talked about and I came away slightly smarter than I was when I arrived. Result.

A full list of the talks is available here.

The Nokia N9 is finally available here in New Zealand, and I must say it looks amazing. I haven't seen one in the metal (plastic?) but from the photos and videos I've seen of it I'd say it's the best looking phone on the market today - better than the iPhone 4S even. I've said it before - Nokia makes some truly great hardware, it's always in the software that they struggle with. But this time it looks like they've hit it out of the park on the software front too with a beautiful fluid Qt4 backed user interface that is fresh and unlike any other I've seen (not just another iOS copy cat!).

The problem is despite all the great reviews the device is getting there is a great big cloud hanging over it - Nokia (or at least their head, ex Microsoft man Stephen Elop) have said that this is the end of the line for in house designed consumer phones, from now on they are placing all bets on Windows Phone 7. This is such a shame as it was said that Nokia didn't have the time to come up with a new OS so going with Windows would be faster but ironically the N9 has shipped before any Windows Phone 7 devices. I can't help but wonder how good this platform could have been, but seeing as this phone (and the developer focussed N950) is the only one to ship with MeeGo I can't see many app developers jumping on the platform so anyone who buys one will only have what it comes preloaded with (and whatever Nokia can add down the road). Thom Holwerda over at osnews.com sums up nicely how I feel about the whole Nokia/Windows Phone deal: "And now, this beautiful platform is stillborn. This breaks my geek heart. Have fun being a Microsoft OEM, Nokia."

Engadget and This Is My Next both have great reviews up. I can't help but feel cheated - this is the first platform I've seen that I would trade my beloved webOS for and it turns out it has just as much of a future... None :-(

Welcome to the new look toki.co.nz! Actually, it looks pretty much like the old one but it's now backed by a CMS. I have been wanting to do this for a while now but never found one I liked - most are written in php and are mysql backed (eg Wordpress) which leads to all sorts of fun when it comes to vulnerabilities!

A few days ago I discovered BlazeBlogger, a CMS that uses flat files and builds the HTML from a template. It's actually "just" a collection of perl scripts that do all the heavy lifting but the result is a nice static HTML page each time I update my blog which I can still use my old stylesheet on to have it look the same (although as you can see I've added a bit of colour as this blog was looking a little, uh, black and white). Another thing I like about BlazeBlogger is there is no admin page or anything like that, rather you do all the blogging simply from the command line ("blaze add" for a new post, "blaze edit 5" to edit the 5th post etc) and it simply fires up your favourite editor and you're away. You can still embed HTML in your posts if you so desire but you certainly don't have to. This requires access to the command line to add/edit/remove blog posts which is no biggie for me as I'm used to doing that anyway and the resultant HTML is almost the same as what I was doing by hand (now I've tweaked the template) so overall I'm really happy with this software.

Yup, this is proper geek blogging - from the command line using vi!

When I was setting up the Cisco VPN on my TouchPad to connect to work I needed to enter the group password. Of course in the PCF file that my work distributes with all the settings the group password is encrypted (you're meant to simply import it into the Cisco VPN client - something I can't do in webOS unfortunately). A quick google and I found this website which can decrypt the password in about one second - yay for weak Cisco password encryption!

Well I went ahead and made a new section for webOS :-) This blog was starting to get just a little too one track.

Hah! Managed to snag a cheap HP TouchPad. I know that it's being discontinued but hey, I got it cheap so at the very least it will make a good video player/ebook reader if nothing else. Also Amazon had shipped the case I ordered with my original order so I didn't want to be stuck with just a case and no TouchPad!

Aquire has a fire sale going on now - though it looks like it has sold out so if you're reading this then you're out of luck :-) I ended up getting one from ebay.com so didn't quite score it that cheap but still got it for a good price (shipping is a bit steep though).

Funny thing is now that they've discontinued the product (and heavily discounted it!) it is flying off the shelves - as I write this it is currently at number 1 and 2 spots on the Amazon best seller list, above the Kindle even! I guess HP finally got what they wanted - number 2 spot in the tablet market. Hopefully the surge of sales will result in a few devs still making apps for it for a while yet.

Now I just need to wait for it to turn up! Maybe I'll need to make a webOS section for this site...

UPDATE: Just heard that it has shipped - I'm excited like a kid at Christmas!