And I now have a working RDP client too! Command line only at this point but I'm not too fussed - that was the last piece of the puzzle needed to enable me to use my TouchPad as my oncall device! It actually works surprisingly well (with the bluetooth keyboard - if you use the virtual keyboard it doesn't leave you with a whole lot of screenspace!).

Yeah, I still have to carry the bluetooth keyboard around with me but it is pretty small and I've since bought a new messenger bag that is still nice and small but fits both TouchPad and keyboard as well as all my other stuff. Life on the road will hopefully be easier now! 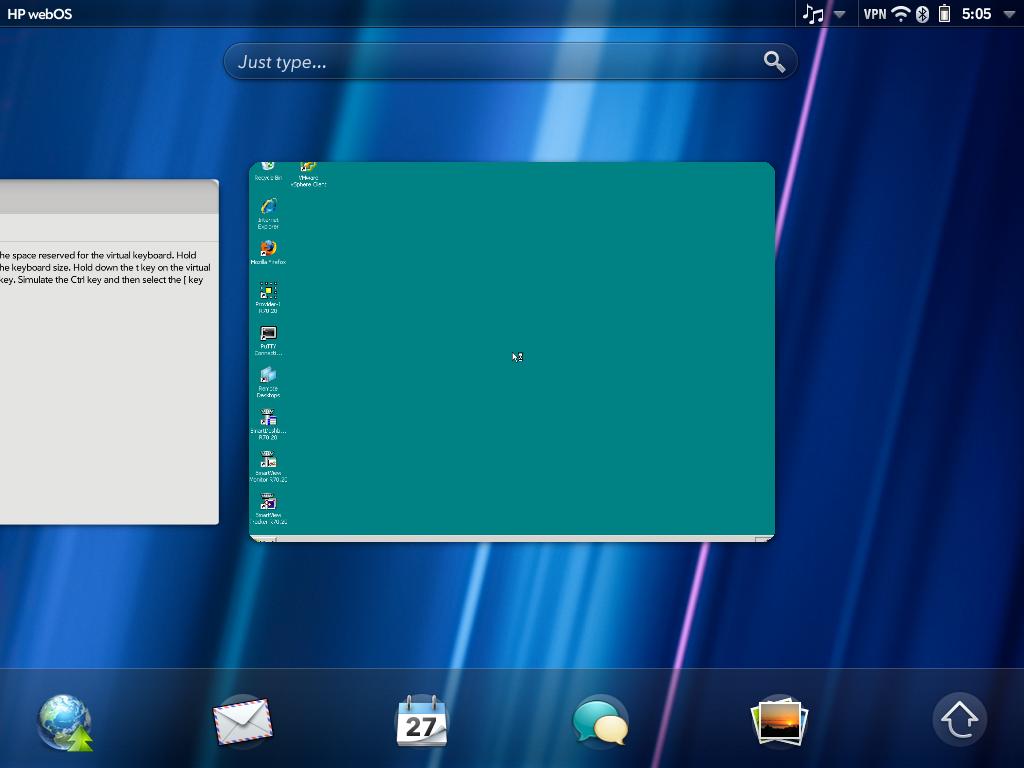 Well that was quick - I now have a way of using ctrl and esc from the virtual keyboard! Certainly more painful than using the bluetooth keyboard but it's a solution non-the-less! Not only that but someone is working on a native RDP client for the TouchPad too! My woes may soon be gone :-)

Having used this tablet for a few weeks now it has become apparent that I can't quite use it as a replacement for my old PowerBook as an oncall device. That's a real pity as it is nice and light (against a laptop) and has really good battery life plus a decent enough screen res to be really useful in this roll.

There are a bunch of things missing that make it not ideal - the biggest of which is the lack of an RDP client (my work uses VDI desktops that we access using RDP). Even if I did have an RDP client however life still isn't perfect - the on screen keyboard lacks a few keys (no arrow keys, no control key, no esc key) which makes it pretty impossible to do any work on the Linux command line (try using the CLI without a control key - it gets pretty unusable pretty quickly!). I can get around that by using the bluetooth keyboard (which still has no esc key but I've since discovered out how to get out of insert mode in VI without it) but then I've now got an extra bit of gear to carry around with me which although being nice and light doesn't fit in the sleeve of my small carry pack when the TouchPad is also in there. There are also some annoying quirks with the keyboard (the arrow keys don't work in every app, you can't use ctrl + c, v etc to copy/paste) which hopefully will be addressed by a patch soon, either official or homebrew.

It still is a fabulous video device (now I've installed the open source TouchPlayer which can play pretty much any movie format) and with the help of the command line I can now mount my NAS drive using CIFS so I can stream any movies to the TouchPad while I lie in bed. It is also still a fabulous web browsing device too, flash works really well and most sites render as they would on my laptop. I certainly don't regret buying it, but for now I still carry my laptop around when on call.

NZ Catalog Up and Running

Well what a difference a week makes - I'm now using the New Zealand catalog as it has started filling up with lots of paid apps and the prices are very reasonable against the US one. Nearly two years into my webOS usage (first had a Palm Pre early 2010) and I can finally purchase apps on my own credit card - I've already spent nearly $20 in the week I've owned it :-)

I've now set up the Cisco VPN client so I can connect to work (although without an RDP client all I can really do with it is my timesheeting! My fingers are crossed something gets ported soon...) and all I really miss is a decent shell as the system I have to use now (start xecutah, start an xserver from that, start an xterm) is very cumbersome. There used to be two terminals in the preware feeds but both have now fallen by the wayside and don't work on the TouchPad. There's also the small problem of the missing 'esc' key to deal with too...

P.S. An update on the battery life - now that it's had a few charge/discharge cycles it seems to last between two and four days depending on usage (unless I'm gaming on it which kills the battery nice 'n' quick!)

P.P.S. The screen is an absolute fingerprint magnet - I need to carry the cleaning cloth everywhere with me!

Well I've now had my TouchPad for a few days and I must say I'm really enjoying it. If I'm honest out of the box (running webOS 3.0.0) it was a bit clunky, often stuttering as I panned around the system and the email app was incredibly slow to open so I can certainly see why the original reviews were pretty harsh - especially considering it cost as much as the iPad 2 when it first released.

A quick system update brought the OS up to version 3.0.2 which made a world of difference. I know others have already said this but it should have been delayed by a few weeks so they (HP) could have shipped it with this version installed as it truly does transform the TouchPad, and the reviewers would have had far fewer issues with it. As well as the update I've installed preware on it which opens the device up to a world of patches, kernels and applications that aren't available through the App Catalog. With a new kernel running at 1.5GHz and some patches to reduce the system logging the TouchPad now simply flies along!

I ended up going with the US App Catalog as the New Zealand one lacks many apps. This is annoying as I'd much rather use my NZ credit card to purchase apps rather than having to jump through hoops to get a US credit card (get a mate in the States to get you a Simon Malls Gift Card - works just like a Visa) but it's not just missing apps - even some of the apps that are there don't work unless you set the catalog to the US (things like the Amazon Kindle app are installed by default on the home screen but when opening I get a "not available in your region" error. Set the catalog to the US one and suddenly it works perfectly, which is ridiculous - I can buy kindle books from Amazon just fine with my NZ card so why restrict the app???)

I've been pleasantly surprised by the battery life I'm getting out of it - I thought it might not last very long going by my experience with my Pre+ (and my original Pre before it) which needs putting on the charger every evening as it generally doesn't even last 24 hours. The TouchPad on the other hand still has around 50% battery remaining after a full (24hr) day of use (and believe me, seeing as I've just bought it I'm using it a lot!) and I can happily take it with me without having to worry about bringing the (admittedly very compact) wall charger with me.

Some other quick notes: Skype works very well on it (although when Skyping a friend on an iPad 2 she complained that my video looked a bit grainy), the web browsing experience is excellent (I was worried that sites with Flash might bog it down but that hasn't been the case at all), HP have replaced Google Maps with Bing Maps which are particularly bad in New Zealand, typing on the virtual keyboard is actually quite do-able (I've bought a bluetooth keyboard for it too but haven't had reason to use it), the size is good but it is heavy, the official HP protective case is actually really good, the audio sound and volume is really good (relatively - it is still just a tablet after all) and I really miss my gestures.

All in all I don't think it's worth iPad money, but for the price I paid I'm *really* pleased I got it :-)