The state of webOS

After receiving my new Pre 3 just under one week ago I've been plunged back into the world of webOS for the first time in a year and a half. I'm once again enjoying the best multitasking the mobile world has to offer, the messenger app is still among the best I've used, GuttenPodder is one of the best podcast apps around and I'm reminded of how far ahead of everyone else Synergy was. And of course the hardware keyboard, now wider and easier to type on than ever. It's not all roses however - webOS 2.2.4 still has some annoying small bugs and the app situation is more dire than it was a year and a half ago with many of them simply broken as services have changed their APIs but the devs have moved on to greener pastures so the webOS apps never get the needed updates. Because of this you find yourself relying on the browser quite a lot and this poses it's own problems as it is based on a ~3 year old rendering engine which means that not all websites work, sometimes displaying strange layout errors, other times just displaying a blank page.

The biggest annoyance for me personally is that Google Apps accounts no longer work - when trying to set one up you get the very helpful "Unknown error" message. This used to work so I'm assuming that Google has changed something at their end. Because of this I have none of my contacts/calendars/Google Chat. I got around the contacts problem by importing all my contacts into a "normal" gmail account and I can still get my email over IMAP, but the lack of calendar and chat is a big hindrance, and I often glance at my Xperia sitting on the shelf and know it would all be a bit easier if I put my SIM back in there. I've searched around for an answer to the Google Apps problem and posted questions and logs in the forums but my guess is no one will patch webOS as it appears that I'm the only one left using a webOS device and a Google Apps account.

Which brings me to what I believe is the biggest problem currently with using webOS - the small size of the community. Even a year and a half ago the forums over at webOS Nation a hive of activity and there was a thriving patch community tweaking the OS to do all sorts of things that Palm or HP never got around to. These days the forums are relatively quiet and the patches have slowed from a torrent to a trickle, and if there is a patch for your problem your best bet is to hunt it out in the forums as it seems that new patches just aren't finding their way into Preware (in fact there have been no new apps or patches in Preware for a while now). My guess is if the Google Apps breakage had happened two years ago it would have been diagnosed and fixed pretty quickly, but these days a lot of the devs have simply moved on, or only dabble in webOS, and I can't say I blame them, the last webOS devices came out over two years ago and there will probably never be another one (other than LG putting webOS into TVs).

Does all this mean I'm unhappy with my purchase? Not really, though if I'm honest the gloss has faded over the last week. Most of that is due to my Google Apps account not working, if that one thing could be fixed I'd be much happier. I can still do pretty much everything else - my mobile banking, listen to Spotify and podcasts, use Skype and Whatsapp, use email on the go, navigate using maps and of course make phone calls. We'll see how long I can persevere before I put my SIM back in the Xperia and join the modern ranks again, but for now I'm enjoying the tinkering and the nostalgia!

Somebody take my credit card away from me - I've just gone and grabbed myself a Pre 3.

Yup, I've just gone and bought something that was released two years ago, and even then wasn't the latest and greatest (it came out at the same time as the iPhone 4 which is still supported by Apple). I haven't used a webOS phone in over a year and a half (having use the N9 for most of that time and only just last month grabbing a Sony Xperia P) but found my old Pre+ sitting in a drawer the other day and got a hankering for webOS. I tried powering it on, it boots but the screen won't accept any touch inputs so I couldn't log in :-(

A quick check on eBay showed that the Pre 3 is still available new in the box from a few places and after thinking it over I took the plunge - I know it's silly buying a phone that's now over two years old and didn't even have much support when it came out but I just can't let webOS go, it was so far ahead of its time and is still the most intuitive phone OS I've ever used. The N9 came close but never really ticked the boxes for me the same way webOS did and I find Android doesn't live up to the promise (but the hardware and app selection is great!).

It could be I only use it for a month or two and get frustrated by the Pre 3 and it ends up in a drawer, my Veer was certainly buggy so who knows if the Pre will be too. But at least then I can say I've got the best webOS phone that was ever produced and can pull it out every now and then if I get nostalgic! 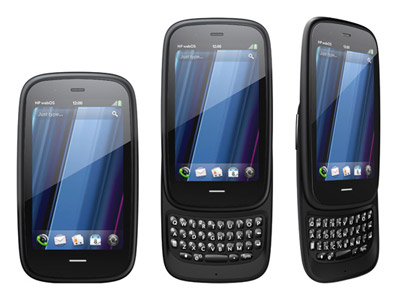 Can't wait for it to turn up now - I'll finally be able to use touch-to-share with my TouchPad!